US vs EU: Getting American microbial products into the European market

The European requirements for regulated products in the food chain are among the strictest in the world. Food safety is taken seriously to protect the European consumer. Authorisation by the European Commission is preceded by a risk assessment performed by the European Food Safety Authority EFSA, which has panels composed of independent scientists. Compared to the United States, there is no system like the US Food and Drug Administration’s (FDA) designation Generally Recognized as Safe (GRAS). Here, we focus on the most challenging requirements of products involving microorganisms, either viable or used as production organisms.

The biggest difference between the US and EU regulations concerns genetic modifications. The EU approaches GMOs from a process point of view: if modern biotechnology i.e. gene technology is used to produce a desired trait in an organism, the organism is called a GMO. In the case of microorganisms, the term used is genetically modified microorganism (GMM). In the EU, GMMs automatically fall under a specific regulation and require risk assessment by EFSA, while in the US the same regulations apply to GMOs and traditional products if the final products are considered to be similar. The risk assessment is based on how the product is used and might be regulated by the FDA, the EPA (US Environmental Protection Agency) or the USDA (US Department of Agriculture) depending on whether the product is human or animal food, pesticides, or agricultural products with potential plat-pest risks, respectively. There is overlap, so you might need authorisation from several agencies. 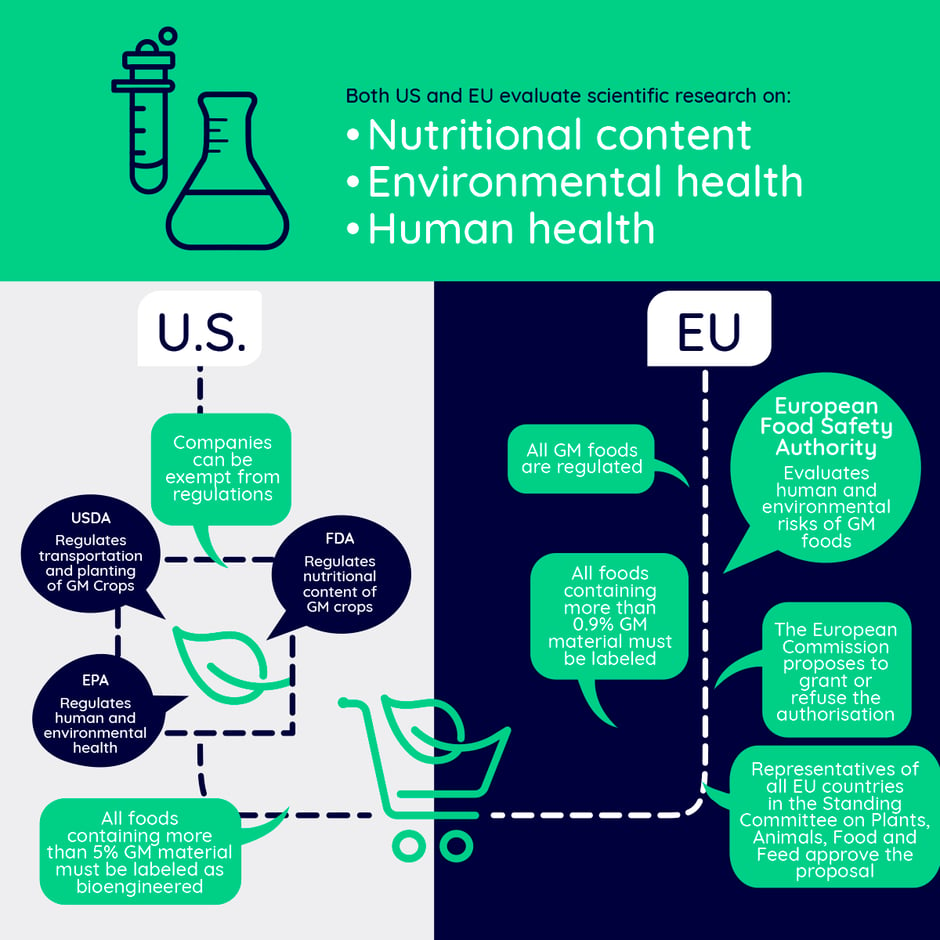 “A maize plant (Zea mays) engineered to express pesticidal proteins is reviewed by all three regulatory agencies: the U.S. Food and Drug Administration (FDA) for food safety, the U.S. Department of Agriculture (USDA) for plant-pest characteristics and other adverse environment effects, and the U.S. Environmental Protection Agency (EPA) to ensure that the plant-expressed pesticide does not pose unreasonable risks to human health or the environment.”

*National Academies of Sciences, Engineering, and Medicine; Division on Earth and Life Studies; Board on Agriculture and Natural Resources; Committee on Genetically Engineered Crops: Past Experience and Future Prospects.

The concepts GRAS (Generally Recognized as Safe) and QPS (Qualified Presumption of Safety) are often confused with each other. According to the Federal Food, Drug, and Cosmetic Act in US law, “a substance can be generally recognized as safe by qualified experts when it is adequately shown to be safe under the conditions of its intended use.” In practice, a company may form an expert panel to review the safety of a product under its intended use. GRAS substances may also be notified to the FDA.

QPS is a concept created by EFSA and applies to microorganisms. A QPS assessment is done when EFSA receives an application for market authorisation of a regulated product that requires a safety assessment. A QPS status may be granted to a species when the following criteria are met:

The QPS applies on the species level. That means a full safety assessment is not required for those species because they are presumed safe. The QPS status is not linked to the intended use of the microorganism, although some species are QPS with the condition or qualification that they are QPS as long as they are only used for "production purposes". This means that viable cells of the production organism may not be present in the final product.

Antimicrobial resistance (AMR) is a global problem. A new EU Regulation on veterinary medicines products (VMPs) entered into application on 28 January 2022. Antimicrobials were not allowed as growth promoters in the EU before, and the new EU Regulation further cements the principle of only using as few antibiotics as possible and only when required. This is in sharp contradiction with the use of antimicrobials in the US and most other regions of the world.

Antimicrobial resistance is fought against also in other ways. EFSA follows a principle that microorganisms used in the food chain should not add to the pool of AMR and they require whole genome sequencing (WGS) and screening of the genome of all bacterial species for AMR genes. Acquired or transferable genes are considered a concern.

Due for a risk assessment by EFSA?

At Biosafe, we know the ins and outs of testing for AMR, the requirements for genome analysis, authorising GMO products and technical dossier preparation for risk assessments by EFSA.